Have you ever found a library book with a gold Pura Belpré Award medal on its cover? Your Highlands County Libraries have many of them, located in the children’s section. Each year, the Pura Belpré Award is given to Latino/Latina writers and illustrators whose work best portrays, affirms, and celebrates the Latino cultural experience in works of literature for children and youth. The winners for 2017 are Juana & Lucas, by Juana Medina; and Lowriders to the Center of the Earth, by Raúl González. Both are excellent works, which will appeal to anyone, kids or adults, who enjoys children’s literature.

Pura Belpré was the first Puerto Rican librarian in New York City. She was born in Cidra, Puerto Rico, in 1899 and came to New York in 1921. At that time, the New York Public Library was actively recruiting staff from ethnically diverse backgrounds, and Belpré was hired as a library assistant. In 1926 she entered NYPL’s Library School to complete her education as a librarian. Belpré worked for NYPL until 1944, when she married and resigned to focus on her writing. She returned to part-time library work in 1960, and continued to advocate for libraries and the Latin American community until her death in 1982.

Throughout her long career with NYPL, Belpré was a strong advocate for providing library services to the Puerto Rican and Hispanic community. She enriched the lives of thousands of children and young people through her bilingual storytimes, puppet shows, and events and classes about Latin American culture. Belpré worked with numerous civic organizations, and was a key figure in making the New York Public Library a center of Latino culture. 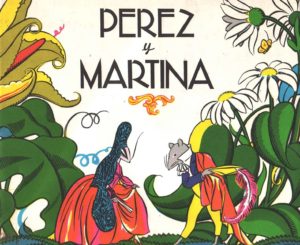 Belpré was also an accomplished folklorist, children’s book author, and translator. Many of her books are adaptations of Puerto Rican folktales. Belpré’s first book, Perez and Martina, was published in 1932. It was the first Spanish language children’s book published by a mainstream United States press, and is still a favorite at storytimes 85 years later. Perez and Martina is the story of a beautiful cockroach, Martina, who finds a coin while sweeping and must decide how to spend it—a new dress, candy, or face powder? After selecting the powder, Martina is courted by a cat, a rooster, a duck, and other animals, but the one who wins her heart is the gallant mouse, Perez. You’ll have to read the book to find out how it ends. The tale is well known in Latin America, but Belpré’s rendition is probably the first in English.

In 1996, the Association for Library Service to Children partnered with REFORMA, the National Association to Promote Library and Information Service to Latinos and the Spanish-Speaking to create the Pura Belpré Award. The list of past winners is available online, and includes novels, poetry, biographies, picture books, and folktales. Most of them are available from your Highlands County Libraries. If you’re looking for a fun Halloween book, check out Los Gatos Black on Halloween, by Marisa Montes. You can celebrate Hispanic heritage and the memory of Pura Belpré by reading one of these books.

Who said you can’t teach an old dog new tricks? by Krystyl Farmer

Whoever made the statement, “you can’t teach an old dog new tricks,” obviously didn’t have access to a free library with infinite resources! (That was hyperbole, our resources actually are limited.) But thankfully, Heartland Library Cooperative (HLC) libraries have the ability to request books from 200+ libraries in the state of Florida. If you and […]

Story Time with a Marine at the Library