“Begin at the beginning,’ the King said, very gravely, ‘and go on till you come to the end: then stop.” 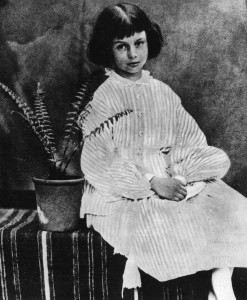 herself, traveling into a fantastical world underground. He published the story that fall under the pen name Lewis Carroll and called it “Alice’s Adventures in Wonderland,” and for 150 years since then readers everywhere have also entered the fiction world of Wonderland with
Alice, where talking animal give riddles and drink tea, croquet can be played with flamingoes, and cats disappear into thin air.

Dodgson was a brilliant mathematician and a man of the church, and it was an open secret that he was Carroll and wrote the whimsical tales. Because he was a mathematician, many speculate that the oddities in Wonderland were a reaction to new developments in mathematics. But because he was also a Victorian, other weirdness may be attributed to Victorian England’s culture, including its people, politicians, and Carroll’s close friends.

What’s even “curiouser and curiouser” is that in celebrating 150 years of Alice in Wonderland, we’re also celebrating 150 years of Children’s Literature. Carroll helped begin a Golden Age of Children’s Literature from 1865 to 1926 that ended with A. A. Milne’s “WinniethePooh.” For the first time, there was literature being printed especially for the children’s enjoyment: not the strict lessons of morality or boring warnings, but fantasies with humor, adventure, and silliness. Within this Golden Age, books like L. Frank Baum’s “The Wonderful Wizard of Oz” and Robert Louis Stevenson’s “Treasure Island” were published and widely enjoyed.

This was also made possible because the Victorians believed in the innocence of childhood instead of looking at children as naturally evil minded like their predecessors, Victorians glorified the simplicity of life before adulthood struck. Plus, with books becoming cheaper and literacy on the rise, it was more plausible to have a child read a book for than in years previous. “Alice’s Adventures in Wonderland” frequently made fun of the teaching rhymes adults forced children to learn and recite.

If you wanted to explore all the history, depth, wordplay, and culture behind both “Alice’s Adventures in Wonderland” and “Alice Through the Looking Glass,” look no further than the recently released “ The Annotated Alice: 150th Anniversary Deluxe Edition,” available in the Heartland Library Cooperative. Within the book, you’ll find over 100 new illustrations to accompany the text along with the original illustrations by Sir John Tenniel, a filmography of all Alice related movies, and hundreds of annotations by respected scholars of Alice over the 150 years. It is everything you could possibly want to know about Alice, her journey, and more.

Another recently released Wonderland book is “Alice in Wonderland Down the Rabbit Hole,” in which

Joe Rhatigan and Charles Nurnberg take Carroll’s words and edit and retell them for a beautiful picture book. Eric Puybaret illustrated this children’s book with bright, vivid scenes showcasing Alice’s marveling at the fantastical world. Or maybe just checkout a copy of the story itself, or the sequel “Alice Through the Looking Glass.” We have some new copies of the old story with fresh illustrations and beautiful covers.

So celebrate the 150 years of impossible things, secret portals, talking animals, and everything else that comes with children’s fantasy with a book by the man who helped start it all.

Fantastical Reads every child will love! by Krystyl Farmer

Fantasy books are a favorite genre of many people because we are not confined to the limits of the world when we are reading it. We can literally read about anything our heart desires when we pick up a fantasy book. What better way to hit those Summer Reading goals than to begin a fresh […]

How can our society “Build a Better World?” This question will be answered in this year’s Summer Reading Program. As members of the Collaborative Summer Library Program (CSLP), libraries across the country will hold events and reading challenges to identify ways young people can build character, help our communities, conserve endangered species and natural habitats, […]