Do you read the book before you watch the movie? Or do you watch the movie and forget the book even existed? I’m always excited when I find a book on the shelves that was made into a movie. Shocked, I think, “Whoa, I didn’t know that was a book!” Here are some little known books that made it to the big screen: 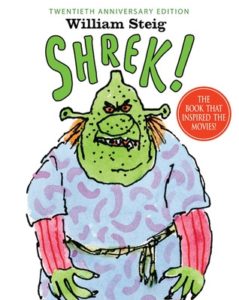 In the book Shrek! by William Steig, Shrek can breathe fire and blow smoke out of his ears, he is uglier than his mother and father put together, and if any snakes are dumb enough to bite him they get convulsions and die. As the book goes on, Shrek meets a witch who tells his fortune: he’ll meet a donkey and ride him to a castle so he can marry the princess. In the movie, Shrek, a Dreamworks Animation production, the ogre lives in a swamp, makes candles from ear wax, and farts to catch fish. Shrek meets a talking donkey and they embark on a quest to get his swamp back when other fairytale creatures encroach. 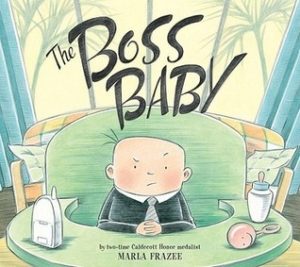 I’m sure The Boss Baby is familiar to you thanks to the recent Dreamworks Animation film, but have you ever read the books? There are two books by Marla Frazee about the boss baby and the bossier baby. In these books, the new baby’s office is right in the middle of the house (it’s a jumperoo and other toys) and instead of crying or having tantrums, they “conduct meetings.” While these babies are dressed in business garb and boss people around, they are still just normal babies- no magic formula like the movie. The movie portrays the boss baby as being part of a lucrative team of babies, investigating the latest cute breed of puppy from Puppy Co.

William Joyce’s A Day with Wilbur Robinson is a hilarious and kooky book about a boy’s best friend named, you guessed it- 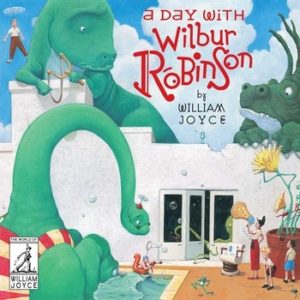 Wilbur Robinson. From the beginning of this book to the last page, it’s a wild ride. Wilbur’s family members are eccentric to say the least, his aunt Billie has a toy train set that is the size of an actual train and his Grandfather trains frogs to sing and dance. The movie version of this book, Meet the Robinsons, focuses on a young orphan, Lewis, who is an inventor. After a bungled school science fair presentation, Lewis meets a young boy named Wilbur Robinson. Wilbur has a time machine and needs Lewis’s help to make sure the time continuum doesn’t get messed up by a guy in a bowler hat.

Those are just three book-to-movie choices but of course, there are several more: the Harry Potter series, Babe, Charlotte’s Web, Ella Enchanted, Stuart Little, The Hunger Games trilogy, and many more. The titles mentioned here are available at your local Heartland Library Cooperative branch, visit www.myhlc.org to browse the online catalog.

November craft bags for week four will be available November 24, 25, & 28, 2020 during normal library operating hours. The fourth and final week’s theme will be a craft of “turkey.” Each bag/kit will contain the supplies and instructions for the craft along with related book titles, snacks, and additional resources that tie into […]