A Land Remembered, by Patrick D. Smith, is perhaps the most beloved work of Florida literature. Published in 1984, the novel chronicles three generations of the MacIvey family, who come to Florida in 1858, rising from poor Crackers struggling to eke out a living in the swamp to cattle, citrus, and land magnates. Smith researched A Land Remembered for more than two years, consulting 60 books and taking voluminous notes. Although many people with Florida 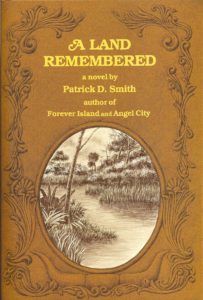 roots, myself included, can relate to the MacIveys, they are not based on any specific family but on composites of typical Florida pioneers. This tale of family, history, and pioneer tenacity speaks to us all, particularly those of us living in the Florida Heartland central to the story. It’s available from all of your Highlands County Libraries, in both the original and a special two-volume edition for young readers.

Patrick D. Smith, although universally acknowledged as a Great Floridian, was actually born in Mississippi; he moved to Florida in 1966. He was nominated for both the Pulitzer Prize and the Nobel Prize, and received dozens of other awards for his work and his contribution to Florida culture. Smith wrote seven novels, four of which are set in Florida, two nonfiction books, and a story collection. He was profiled in the documentaries Visions of Nature: Patrick Smith’s Florida and Patrick Smith’s Florida: A Sense of Place. Smith died in 2014 at the age of 86. 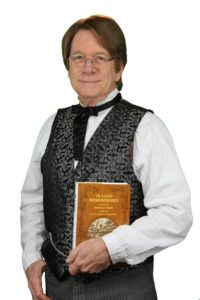 Smith’s son, Rick, continues his father’s legacy in a multimedia show, Patrick Smith’s Florida Is A Land Remembered. It’s coming to the Avon Park Library on Tuesday, March 20 at 3:00 pm, sponsored by the Friends of the Avon Park Library. This family-friendly show allows us to meet the author and hear about his life and the experiences which inspired his novels, including his stint working in a migrant labor camp in South Florida. The resulting novel, Angel City, exposed the sordid conditions to which migrant workers were subjected, and ultimately helped improve their situation. Smith had an extraordinary life, and this is just one of the many adventures which contributed to his literary work.

The show is an exceptional example of visual storytelling, incorporating over 50 video clips, special effects, music, and more. This heart-warming and nostalgic trip back in time to Old Florida will have you laughing, smiling, and clapping, and if you haven’t read Smith’s books already, you will definitely want to after you see the show. So come and join us on March 20, as Rick and Patrick tell their story!

The Summer of 72 by Frank Phillips

Hey, isn’t that 30 years too many if you’re recalling one of the classic coming of age movies of all time? It would be, but this title is referring to something more like the coming of aging. You see this was the summer of my 72nd year and coincidentally, the summer that I first really […]

By strict definition, a caregiver or carer “is an unpaid or paid person who helps another individual with an impairment with his or her activities of daily living. Caregiving is most commonly used to address impairments related to old age, disability, a disease or a mental disorder.” Statistics show that the amount of caregiving that […]

Heartland Library Cooperative patrons, we have a special event for you! Join us for Love at the Library book club February 1-28, 2021 and author event. Just read Enjoy the View by Sarah Morgenthaler and Happy Singles Day by Ann Marie Walker and sign up for the LIVE (virtual) author event. You can even read […]