Do you like dragons? Did you know that there’s an official “holiday” to celebrate these popular mythical creatures? It’s true—Saturday, January 16th is Appreciate a Dragon Day. Started in 2004 by Christian fantasy author Donita K. Paul, this is the perfect day to enjoy some dragon books and movies.

Dragons, or dragon-like creatures, are a major part of mythology and literature in many world cultures. This is especially true in China, where the dragon is a symbol of strength and good luck; it was historically associated with the Emperors of China. The Dragon is one of the twelve animals in the Chinese zodiac, and the Year of the Dragon is traditionally considered a good time to have children, as persons born under the Dragon are believed to have auspicious fortunes. In Western tradition, dragons are usually depicted as malevolent or monstrous beasts, to be slain by a hero. Some noted dragon-slaying heroes include Beowulf, Siegfried, and Hercules. St. George and the Dragon was a favorite subject of medieval and Renaissance Christian art, as was St. Margaret of Antioch, one of the rare female dragon-slayers. The Red Dragon is the national symbol of Wales, where it is said to derive from the battle standard of King Arthur, whose epithet “Pendragon” means “Chief Dragon.”

Dragons are a favorite subject in modern fantasy literature. The fearsome Smaug is the chief antagonist of J.R.R. Tolkein’s The Hobbit, published in 1937. Smaug is a fire-breathing dragon of great magical power, who hoards treasure stolen from the dwarves of Erebor; his other
chief source of amusement is terrorizing the local townspeople. Tolkein incorporated many aspects of Anglo-Saxon, Celtic, and Germanic mythology into his fantasy world of Middle-Earth, and The Hobbit uses these motifs superbly. British actor Benedict Cumberbatch, who portrayed Smaug in the film adaptations of the book, received much praise for his performance; also noteworthy are the films’ special effects. 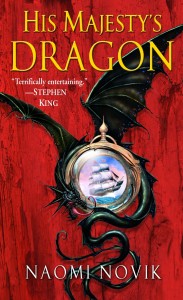 Among the most popular dragon books is Anne McCaffrey’s Dragonriders of Pern series, which begins with the 1967 book Dragonflight. McCaffrey was the first woman to win the Hugo Award and the Nebula Award, the two most prestigious literary prizes for science fiction and fantasy writing. The Pern books are set on another planet, whose human colonists genetically engineer dragons as a weapon against a destructive alien spore that periodically threatens their world. The dragons can fly, breathe fire, and communicate telepathically with each other and with their riders, all abilities commonly attributed to dragons in mythology and literature. Dragons are a big part of the cultural mythos in the Pern universe, both before and after the colonists settled their new planet.

The theme of dragons as heroes is exemplified by Naomi Novik’s Temeraire series, a reimagining of the Napoleonic Wars as fought by an air force of dragons, manned by crews of aviators. These dragons are sapient and intelligent, and bond with a human companion shortly after hatching. In His Majesty’s Dragon (2006), William Laurence is a Royal Navy captain who captures a dragon egg in battle. When the egg hatches, the dragon Temeraire bonds with Laurence and they begin their career in the Aerial Corps, which takes them to Trafalgar, China, Africa, and other countries. One of Novik’s main themes is dragon-human relations throughout world societies; in Britain, dragons are regarded as talking beasts of burden, while in China they can own property, attend school, serve in the military or in government positions, among other rights. Now up to eight books, with a ninth due to be published later this year, this series is loads of fun—it’s Horatio Hornblower with a dragon! 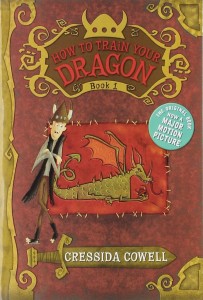 Dragons are featured in dozens of other books. Younger readers may enjoy Cressida Cowell’s How to Train Your Dragon, which is quite different from the hit 2010 film; Christopher Paolini’s Inheritance Cycle; Seraphina, by Rachel Hartman; Dragonbreath, by Ursula Vernon; and the Enchanted Forest Chronicles by Patricia C. Wrede. Dragons also appear in Rick Riordan’s Percy Jackson books, the Spiderwick Chronicles by Tony DiTerlizzi and Holly Black, and, of course, Harry Potter. Other dragon writers from the grownup section include Mercedes Lackey, Marie Brennan, Robin Hobb, Melanie Rawn, Ursula K. Le Guin, and Terry Pratchett. Dragons are also important in George R.R. Martin’s A Game of Thrones books and the TV show based on them, which chronicle the power struggle for the Iron Throne of Westeros. Daenerys Targaryen, the exiled daughter of a deposed king, is given three dragon eggs, which symbolize her claim to rule—and are the chief weapon she uses to seize power.

If you appreciate dragons as much as I do, come by the Avon Park Library on Saturday, January 16th. The Library will be showing two dragon-themed films: an animated children’s movie at 11:00 am, and a matinee suitable for all ages at 2:00 pm. Both films are based on popular dragon books mentioned in this article. Call 863 452-3803 to find out which ones, or pick up a calendar next time you’re in the Library. Your Highlands County Libraries have all of the books mentioned in this article, and they’re just a brief sample of the wide world of dragon literature.

How to Train Your Dragon by Cressida Cowell.

The past few weeks, we have been submerged in hurricane information, and even the library lines written previously by Samantha Roll was hurricane related. Living in Florida, tropical storms are just a fact of life. To get the sunshine, you must go through the rain. Highlands County was blessed, lucky, caught a break, whatever […]

Libraries Are NOT Obsolete!

With increased access to ebooks and digital entertainment many believe libraries will become or are already obsolete. I disagree. Although both print and ebook sales have increased over the past five years, printed books have experienced a proportionately larger surge in sales than ebooks. During the first half of 2021 sales of books in print […]